2071: The World We’ll Leave Our Grandchildren 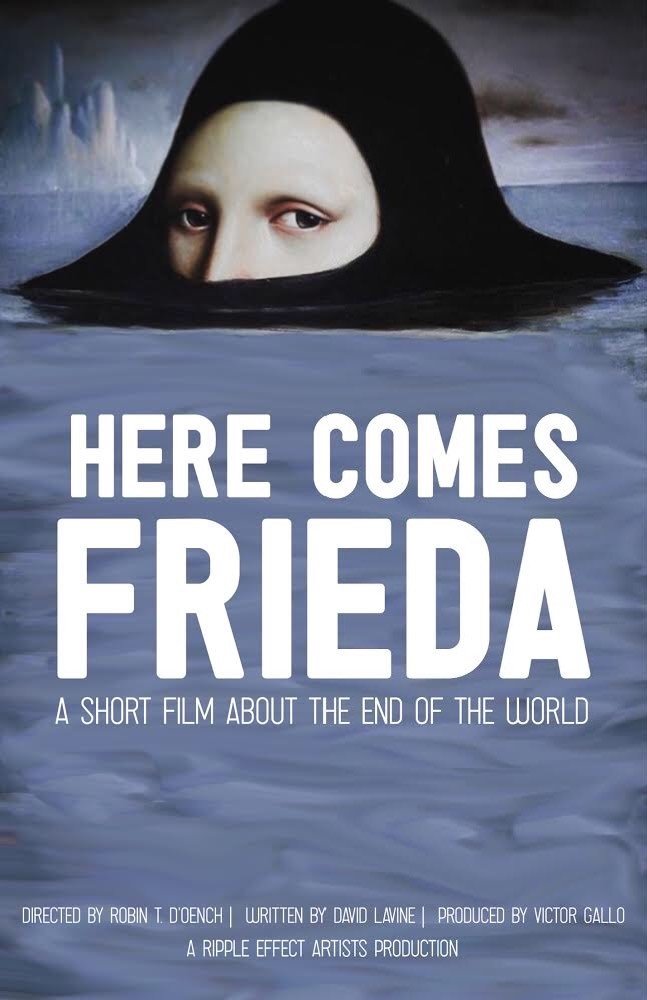 Through HERE COMES FRIEDA we aim to help bring a more diverse array of voices to the world of filmmaking. Alongside the production of the film, we are launching an apprenticeship program. Five teenagers, all young people of color, will have the opportunity to learn the craft of filmmaking first hand 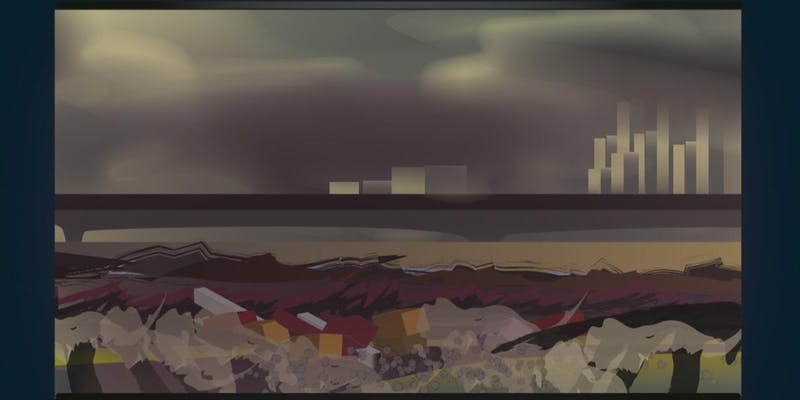 Once Upon A Time, This Land Was Made For You And Me 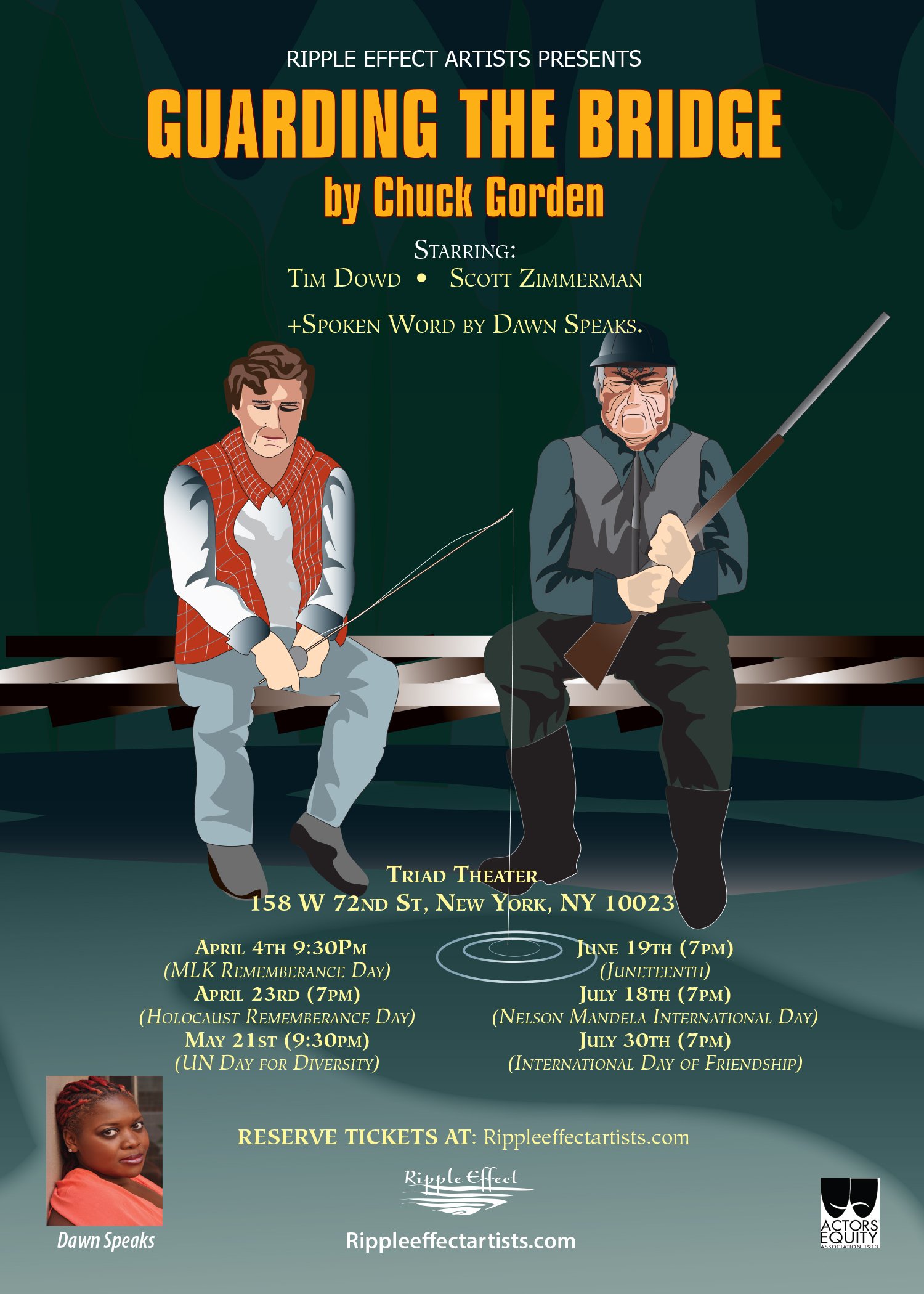 Benefitting Center for the Study of White American Culture.

Synopsis: A bigoted father and his well educated son occupy a broken down bridge in a remote wooded area. The father is a manifestation of the son’s memory as he recalls events that occurred on the day Martin Luther King, Jr. was assassinated. It becomes increasingly obvious that, despite the younger man’s protests to the contrary, his father’s prejudices are grounded in his subconscious.

Co-winner of the 1998 Michael Kanin Award for Best Short Play.

Dawn Speaks is an educator, singer, actor, and poet. A native New Yorker, Dawn has been performing for more than 20 years by bringing poetry, song, and acting throughout venues in and around New York City. With a commitment to educating, her work has focused on race, women, and culture. She has performed in playwright Rebekah L. Pierce’s play titled “Belle Blu” as part of the Strawberry One Act Festival and can be seen in Joseph C. Grant’s five part indie series titled “Da Stuy” and in the full-length feature film “Delusions of Guinevere” directed by Joanna Bowzer. 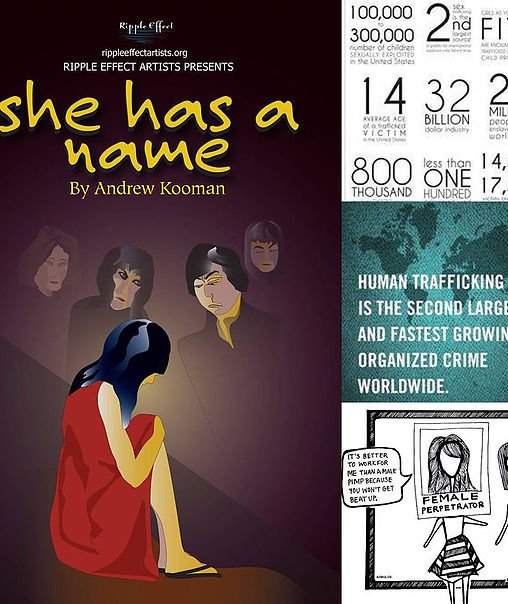 She has a Name

Currently, there are an estimated 27 million slaves in the world today. That’s the highest recorded number of slaves in history.

Human trafficking has been identified as the largest human rights violation in the history of mankind. Human trafficking is the second largest criminal enterprise in the world, after drug smuggling and arms dealing.

We will show how Human Trafficking occurs as a global epidemic in the production of Andrew Kooman’s SHE HAS A NAME, followed by an educational, talk-back conversation with audiences including the following organizations: Coalition Against Trafficking in Women, RestoreNYC, and Braking The Silence as well as a distinguished Psychotherapists. Audiences in this Off-Broadway production will leave being fully aware of the scope of this global-horror and what can be done to prevent it and to support victims. A percentage of Box Office Proceeds will benefit these organizations.

Synopsis: The two main characters are a young lawyer; and Number 18, a young female prostitute who claims to be fifteen years old and has been a prostitute for six years. The drama centers on his infiltration of a brothel ring that is trafficking girls. The lawyer comes to believe that Number 18 could be a key witness to a human trafficking incident and tries to gain her trust and persuade her to testify against the ring. The victimized child in the play is known only by the number 18 to reflect that traffickers often dehumanize their victims by giving them a new name or simply a number. 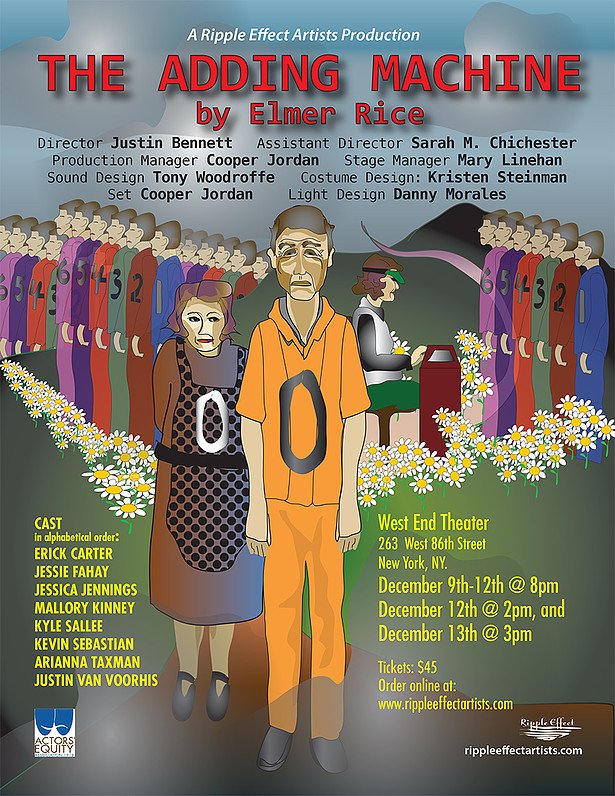 Synopsis: The author of this play takes us through Mr. Zero’s trial, execution, excursion and arrest going into the afterlife. During the whole series of this episodic journey Mr. Zero is surprisingly oblivious to his deepest needs, wants and desires. The story focuses on Mr. Zero, an accountant at a large, faceless company. After 25 years at his job, he discovers that he will be replaced by an adding machine. In anger and pain, he snaps and kills his boss. Mr. Zero is then tried for murder, is found guilty and hanged. He wakes up in a heaven-like setting known as the “Elysian Fields.” Mr. Zero meets a man named Shrdlu, then begins to operate an adding machine until Lieutenant Charles, the boss of the Elysian Fields, comes to tell Zero that he is a waste of space and his soul is going to be sent back to the earth to be reused. The play ends with Zero following a very attractive girl named Hope (who may not actually exist) off stage. 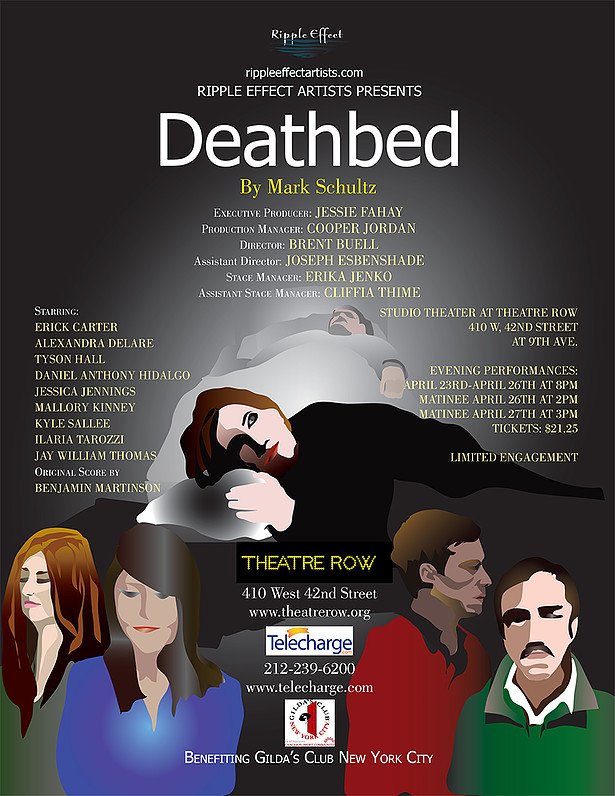 Synopsis: The plight of nine characters dealing with or preparing for the end. All immersed in the guilt of choosing their own suffering above others. 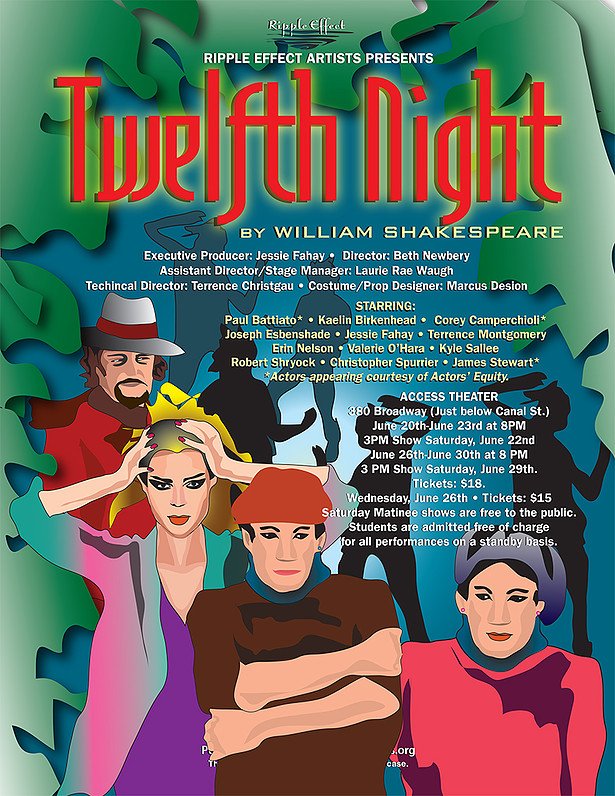 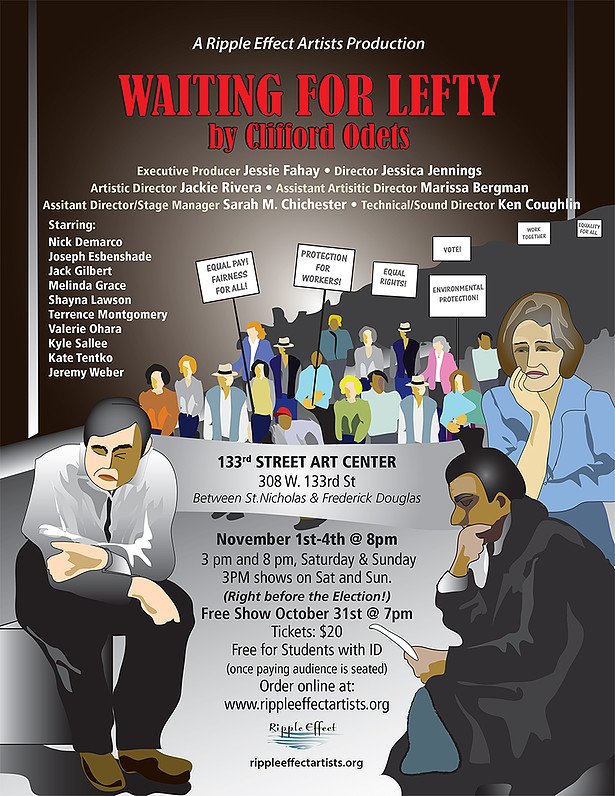 Synopsis: The play is composed of seven related vignettes. The entire play is framed by the meeting of cab drivers who are planning a labor strike. The framing uses the audience as part of the meeting. 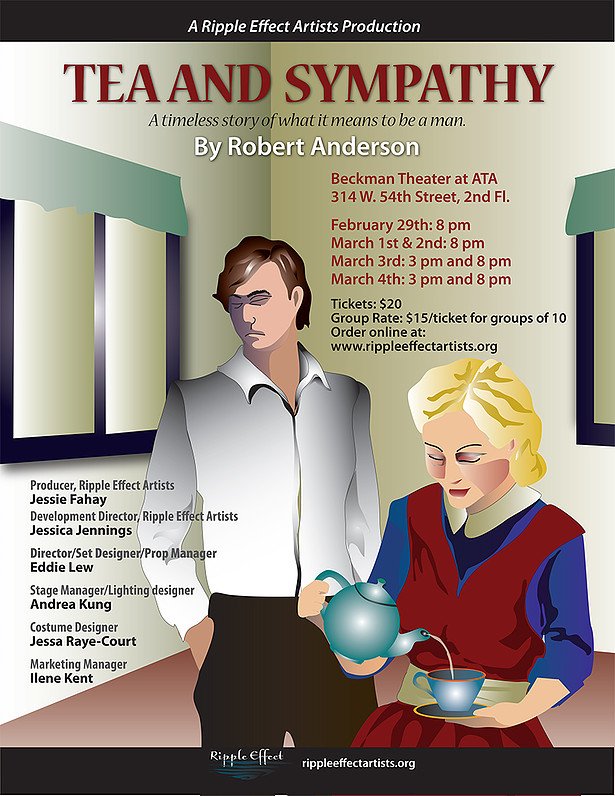 Synopsis: A 1953 stage play in three acts about a male private school student, Tom Lee, who faces accusations of homosexuality. A woman, Laura, who is married to an instructor, opposes the students’ shaming of Lee and romantically pursues him so he can prove that he has a masculine character 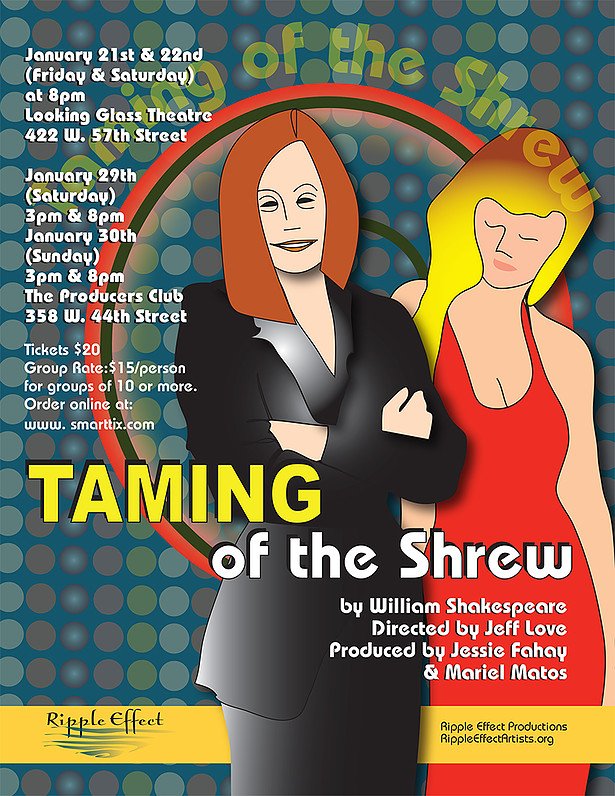 Taming of the Shrew

Synopsis: The main plot depicts the courtship of Petruchio and Katherina, the headstrong, obdurate shrew. Initially, Katherina is an unwilling participant in the relationship; however, Petruchio “tames” her with various psychological torments, such as keeping her from eating and drinking, until she becomes a desirable, compliant, and obedient bride.